skip to main | skip to sidebar

Saturday went great!!!! Everyone had a great time and we raised more money than I anticipated! I can't say thank you enough to everyone who came and participated and to those who donated door prizes as well! I took lots of pictures and will post them tomorrow sometime. It was a long weekend and I'm still trying to catch up from my lost hour of sleep!
Posted by Erin at 7:16 PM 41 comments:

Thank you Tom Nadeau for the awesome logo!!! Check out his website at www.iamgraphicdesign.com. He's the best graphic designer ever!!
Posted by Erin at 5:46 PM No comments:

We're still in need of a couple of prizes for our bowling event. If you would like to donate an item for a prize or know someone who might be interested in helping us out, please leave it in the comments or email me at ewilson@swbell.net.

We are well on our way!! We've received several donations and reservations for the Bowling Event! I even received a donation from a 7 year old - how awesome!!!
I need to know by the end of the week if you'd like to attend our event. You can email me at ewilson@swbell.net. Click on the picture on the right for all the details. If you're unable to attend but would like to help you can click the MS button on the right hand side of the screen or go to www.nationalmssociety.org/goto/erinwilson. Thank you so much to everyone who has already sent in your donations!!
Stay tuned for more updates!
Posted by Erin at 10:12 AM No comments:

We've come up with a name for our team....Janet's Heroes!
Tomorrow when I get home from Florida I'm going to be emailing and mailing out letters and flyers. I know that this is going to be a great fundraising year for us! Thank you in advance for all of your help and support!
Posted by Erin at 8:52 AM No comments:

My mom, Janet Donica, was diagnosed with Multiple Sclerosis when I was 10 years old and my younger brother was 7. I remember the day that she told my brother and I. I believe that my dad was at work so it was just the three of us. The dr's office had given her a pamphlet or book for us to look at, which I remember taking with me after our talk. The only thing that I remember about our conversation was that she told us that Multiple Sclerosis was not something that we could catch from her. As a 10 year old, I guess that's all I really needed to hear because I remember that I wasn't upset about the news. In my mind she was acting fine and didn't look sick so it wasn't anything to worry about. At that point I truly didn't understand the magnitude of what was going on. I don't think any of us knew. Throughout the rest of my childhood I remember there were times when my mom's MS didn't seem to affect her at all. But I also remember the times when she was sick. The times that she couldn't work, couldn't come to a band concert or make it to my brother's baseball game.

I remember so many times praying that God would heal my mom...I still do.

Growing up my parents provided us with a loving home and somehow they managed to shelter us from a lot of the stresses that come with having an incurable disease. Now as a parent I can understand how hard that must have been.

As I got older, I started trying to learn everything I could about MS. I remember doing a high school science project on it. I guess that was my way of trying to understand. I'm one of those people who needs to know the why behind the big things. And when there's a problem, I'm going to find a solution. Growing up we did the MS Walk several years with my grandmother and parents. One year my mother's coworkers and friends formed a team and walked with us. I remember we had a lot of fun. Several years lapsed and I didn't participate in the walk for one reason or another. But my grandmother always did.

My mom's MS was in remission for several years, maybe that's why I didn't really see a need to participate. But last January after my mother again started having difficulties due to her MS, I decided that I needed to do something. I decided that I wanted to again participate in the MS walk so that I could raise money to help with research and existing programs to benefit those with MS.So I formed a team. Me, Lance, Luke & Lindsey walked with us, and of course my grandmother. I sent out letters and emails letting people know what I was doing and honestly, the response was overwhelming. I originally started out thinking I could raise about $300. I raised that in the first week and more than quadrupled that by the time I was done! It was very humbling that so many people cared enough to give to MY cause.

This past year has been a difficult one for my mom. Due to her physical and cognitive problems that are a direct result of MS, she has been forced to quit working. She is constantly dealing with memory problems, impaired vision, physical problems, and the list goes on. After seeing how her much her disease has progressed in this past year, I feel that I have to set my goal high this year. I know that whatever amount that I raise isn't going to singlehandedly fund finding a cure for Multiple Sclerosis. But I know that I can't not participate.

So this year we have again formed our little team. Me, Lance, Luke, Lindsey, Mamaw, and we gained a new member! My friend Julie is walking with us this year. Even though our team is small, I know we can make a difference. That's why this year we are hosting a fundraising event. March 7, 2009 at Plano Super Bowl. See below for more details.

Thanks for visiting and I hope that you'll join my mission!
Posted by Erin at 4:58 PM No comments: 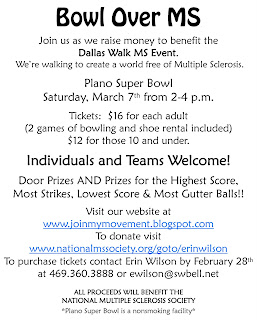 Thank you so much to everyone who has already sent in your donations!! You can donate by clicking the MS button above and you can view our progress at www.nationalmssociety.org/goto/erinwilson.

THANKS FOR YOUR DONATIONS FOR OUR BOWLING FUNDRAISER!!
A special thank you to Jeff Richter for donating VIP cards for Babes, Chel Vandover for donating Longaberger items and Julie McKeown for making some delicious cookies and cupcakes for everyone!! We also had several other door prizes donated by family members as well. 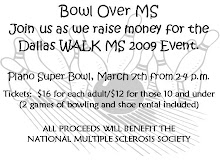 Click On Picture For Details
If you know anyone who's been affected by MS or who might be interested please encourage them to visit our blog.

To Learn More About Multiple Sclerosis